Working with a new camera, which has a full frame sensor over my old crop sensor, has quite literally changed my entire perspective recently. I’ve used a full frame camera before, but using this camera full time now has changed how I look at subjects, lighting, and everything else.

For the uninitiated, the difference between my old crop sensor camera and the full frame camera is literally that with the same lens on both bodies, I have a wider frame of view with the full frame. What it amounts to is that on the crop sensor, the sensor is a notch smaller, but the lens projects the same view into the camera body. The effect is that, because the sensor is smaller than the image coming in, the image that is captured is cropped to the size of the sensor. Obviously anything else falls off the edge and isn’t captured in the image.

Full frame sensors, as the name suggests, are larger, and so photos captured with the bigger sensor have a wider perspective.

While full frame sensors capture bigger images, and are higher resolution because they serve the professional market, there is one benefit to crop sensors: if you’re trying to get extra close with your photos, zoom lenses on a crop sensor get a natural boost. If you have a 300mm zoom lens, on the crop body that 300mm actually work at around 450mm, which is obviously a big deal.

Right now I’m still toying with the camera’s features, but for now I wanted to re-start my photography blog with my first two new photos from the camera. 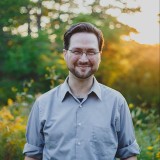